In a case that has been followed closely by many interested parties, the First Circuit Court of Appeals ruled in favor of the taxpayers and the validity of their charitable contribution of an historical façade conservation easement in Kaufman v. Shulman. The 1st Circuit vacated the Tax Court’s legal ruling on partial summary judgment and remanded the matter for further findings on the questions of penalties and valuation.

The taxpayers in Kaufman owned an approximately 150 year-old row house in the historic district of South End in Boston. The home reflected mid-nineteenth century architecture and included a unique Venetian-Gothic style façade. In 2003, the taxpayers executed a “Preservation Restriction Agreement” donating an easement over the property to a qualified charitable organization for the purpose of protecting and preserving the historical features of the home. On the advice of the donee, the taxpayers obtained an appraisal of the contribution from an experienced appraiser who valued the easement at $220,800. The taxpayers took deductions on their 2003 and 2004 tax returns for the value of the donated easement, subject to the limits of IRC Sec. 170(b)(1)(E). 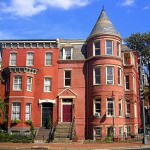 The property was subject to a mortgage when the taxpayers made the donation. The taxpayers obtained an agreement from the lender subordinating certain of the mortgage-holder’s rights in the property to the donee in accordance with the regulations governing the charitable donation of conservation easements. The agreement included several restrictive clauses, one of which became the focus of the Tax Court’s determination and the 1st Circuit’s ruling. That clause read as follows:

The Mortgagee/Lender and its assignees shall have a prior claim to all insurance proceeds as a result of any casualty, hazard or accident occurring to or about the Property and all proceeds of condemnation, and shall be entitled to same in preference to Grantee until the Mortgage is paid off and discharged, notwithstanding that the Mortgage is subordinate in priority to the [Preservation Restriction] Agreement.

Following an examination of their 2003 and 2004 returns, the IRS issued a notice of deficiency to the Kaufmans disallowing the deductions for the charitable contribution of the easement. The IRS maintained that the donation did not meet the regulatory requirements of Section 170(h). The taxpayers petitioned the U.S. Tax Court.

The Tax Court, in a division opinion by Judge Halpern, ruled for the IRS on a motion for partial summary judgment. Kaufman v. Commissioner, 134 T.C. 182 (2010). The Tax Court held that the conservation easement as executed failed to satisfy the requirement of Treas. Reg. Sec. 1.170A-14(g)(6). The Tax Court’s position on summary judgment, as summarized by the First Circuit, was that

although the Kaufmans in the Preservation Restriction Agreement governing 19 Rutland Square granted the Trust an entitlement to a proportionate share of post-extinguishment proceeds, thus seemingly complying with the regulation, the lender agreement executed by Washington Mutual undercut this commitment–and so defeated the deduction–by stipulating that “[t]he Mortgagee/Lender and its assignees shall have a prior claim to all insurance proceeds . . . and all proceeds of condemnation, and shall be entitled to same in preference to Grantee until the Mortgage is paid off and discharged.”

Even though the Tax Court decided for the government “entirely” on the basis of Treas. Reg. Sec. 1.170A-14(g)(6), the Court of Appeals also addressed paragraphs (g)(1) (perpetuity), (g)(2) (remote events), and g(3) (subordination) of the regulation in its opinion. The First Circuit observed that the IRS’s arguments in support of the Tax Court’s decision under g(6) would “appear to doom practically all donations of easements, which is surely contrary to the purpose of Congress.” The appellate court continued that it “cannot find reasonable an impromptu reading [of a regulation] that is not compelled and would defeat the purpose of the statute, as we think is the case here.” So on the big issue in the case, whether the mortgage subordination clause that granted the lender a prior claim to insurance and condemnation proceeds defeated the deduction, the First Circuit vacated the Tax Court’s legal conclusion.

The First Circuit made clear that it did not rest its decision on either the application of paragraphs (g)(3), addressing the defeasance of the deduction by remote future events, or (g)(2) which the taxpayers argued would have upheld the subordination agreement regardless of the extinguishment provision. This caveat seems to preserve the Tax Court’s recent opinion in Mitchell v. Commissioner from the scope of this ruling.

The appellate panel also addressed the “in perpetuity” requirement of Treas. Reg. Sec. 1.170A-14(g)(1) and the language in the agreement stating that “nothing herein contained shall be construed to limit the [Trust’s] right to give its consent (e.g., to changes in the façade) or to abandon some or all of its rights hereunder.” The First Circuit noted its agreement with the D.C. Circuit who decided the same issue in Commissioner v. Simmons, 646 F.3d 6 (D.C. Cir. 2011) and added that the question was not whether the paragraph was a reasonable interpretation of the underlying statute, Sec. 170(h)(5), but whether the IRS’s interpretation of the regulation was reasonable. The court concluded that the regulation did not support the IRS’s stringent view.

The Tax Court applied the second prong of Sego finding an abuse of discretion in the Appeals Officer’s incorrect application of the law. The underlying legal question was whether or not petitioners owned property held in a trust and which body of law, state, federal or both, should be applied to answer that question.

The Court of Appeals did not address Sego in its opinion. The appellate court, however, did hold that the role of the Tax Court in reviewing collection due process determinations was

to decide whether the IRS’s subsidiary factual and legal determinations are
reasonable and whether the ultimate outcome of the CDP proceeding
constitutes an abuse of the IRS’s wide discretion.

The First Circuit’s opinion is the fourth milepost in petitioners’ legal saga since their first encounter with the IRS Office of Appeals. In 2006, petitioners requested review of their collection due process determination when the Appeals Officer rejected their offer in compromise. Respondent moved for summary judgment. Petitioners’ responded maintaining that their offer in compromise should have been accepted because there was doubt as to the collectibility of tax and the appeals officer erred by attributing assets to petitioners that they did not own. The Tax Court denied respondent’s motion in a memorandum decision and remanded the case to Appeals for a redetermination on the applicable law. Dalton v. Commissioner, T.C. Memo. 2008-165. Following the second review by the Appeals Officer, the case returned to the Tax Court on petitioners’ motion for summary judgment. The IRS filed a response to petitioner’s motion for summary judgment and lodged a second motion for summary judgment. In the reviewed opinion noted above, the Tax Court found that the Office of Appeals’ decision to continue with the collection action was an abuse of discretion because the Appeals Officer rejected petitioners’ offer in compromise on erroneous legal grounds. Dalton v. Commissioner, 135 T.C. 393 (2010). The Dalton’s final encounter in the Tax Court resulted in a memorandum opinion awarding them legal fees. Dalton v. Commissioner, T.C. Memo. 2011-136. All three decisions in favor of the Dalton’s were reversed by the First Circuit.